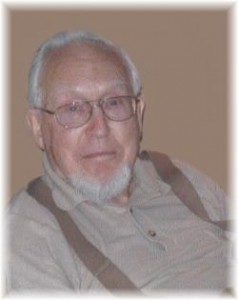 It is with sadness that the family of Herman van Groenewoud announce his passing on Saturday, May 7, 2016 at the age of 89.
Herman was predeceased by his wife of 60 years, Rita and by his sister Willy in the Netherlands.
He is survived by his son, Ernst and his daughter, Mariet (Scott Rynax) as well as his adult grandsons, Nicholas Rynax (Jaime Sturgeon) and Jared Rynax.
Herman immigrated to Canada from the Netherlands with his wife in 1950.  Their children were born in Quebec and Saskatchewan before the family made Fredericton their home in 1965.  After completing his education, culminating with his Doctorate of Science, he was employed by the federal department of Natural Resources as a research scientist in Forest Ecology.
Herman enjoyed a wide variety of interests which included starting Kingsclear Mushrooms.  Another great pleasure of his was to spend time at the family cottage on Little Magaguadavic Lake, which his son helped him build in the late 1970’s.  Over the years there have been many family gatherings at this very special place.
Herman’s request for no visitation or funeral service will be respected.  For those who wish, memorials to the charity of the donor’s choice would be appreciated by the family.